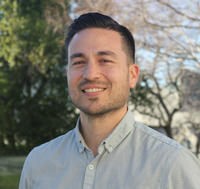 Advises and assists student athletes towards holistic development, including academic options and alternatives while understanding and complying with University, College, and NCAA rules and requirements. Provides tailored academic counseling to maximize student athlete potential and academic performance while balancing athletic and personal commitments.

After earning a Bachelor’s Degree from UC Berkeley in 2000 and being named “Most Outstanding Student Athlete” his senior year, Cassidy went on to earn a Master’s Degree in Sport Management from the University of San Francisco. After college, he worked as a Sports Information Director at Cal before working exclusively as a full-time staff member of the Men’s Basketball Team from 2001-2003. Cassidy worked as an Academic Advisor for student athletes at University of Southern California from 2003-2006, before joining the ASC staff in the Fall of 2006. Born in San Francisco, Cassidy is a former member of the Cal Men’s Basketball Team, where he played on Cal’s last Sweet 16 team in 1997. Some of Cassidy’s hobbies include drawing, carving pumpkins, Photoshop, golfing, gardening and video editing.