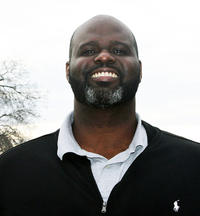 Tarik manages and co-facilitates programs and resources that focus on the holistic development of all student athletes.  These areas of support include, but are not limited to freshman student athlete experience, community engagement, character and leadership development, and career coaching.  Tarik also serves as the liaison between the ASC and various campus partners.

Tarik Glenn is a proud Cal alum and had the privilege of being a Football Student Athlete from 1993-1997.  After being selected as the 19th pick overall, in the 1997 NFL Draft to the Indianapolis Colts, Tarik spent the next two off seasons completing his degree in Social Welfare.  Tarik spent ten memorable seasons (three as a pro bowl player) with the Indianapolis Colts as a key part of its dominating offense.  Tarik became one of the teams core leaders during his tenure, and helped lead the Colts to win their first Super Bowl in franchise hisitory.  Four years into his career with the Colts, Tarik began to dream about how he could use his platform as a football star to raise up the next generation of leaders.  Tarik Glenn served as president of DREAM Alive from 2011-2013 and worked tirelessly to provide DREAM Alive hands-on leadership.  Under Tarik’s direction, DREAM Alive’s innovative program was/is developing young men and women of integrity and character who will become the civic-minded leaders of the future.